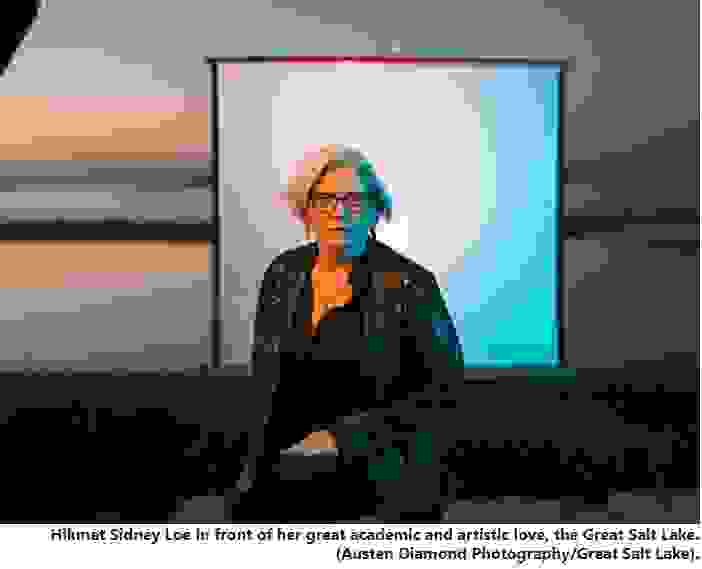 When Hikmet Sidney Loe first flew into the Salt Lake Valley, she was unimpressed. Loe, from the East Coast, was used to a verdant landscape. What were these arid, strange patterns below her? Little did she know it would shape her career in academia and art.

Loe, who has master’s degrees in both library studies and art history, was magnetically drawn to Robert Smithson’s “Spiral Jetty,” a famous piece of land art of the Great Salt Lake created in 1970. In fact, she wrote her art history master’s thesis on “Spiral Jetty.”

“It was underwater and it came back out in 1993. So, it was sort of slumbering for those 20 years. I moved here in late ’94. People wanted me to go out to see it. I have been literally working on ‘Spiral Jetty’ as a topic ever since,” said Loe, Holladay’s artist of the month.

In part for her research and in part for artistic interest, Loe began taking pictures of the Great Salt Lake from helicopters, commercial flights and Cessnas (small aircraft).

“I've called this body of photographic work either abstractions because they are abstract images of specific regions of Great Salt Lake, but then I also call them extractions because I'm extracting images from the lake, and usually the photographs are taken of extraction processes that take place out on Great Salt Lake.” Loe is referring to businesses that extract minerals, etc. from the lake.

“We’re talking then about oil exploration or the Transcontinental Railroad or migration patterns by Euro-Americans,” she said. “There are many different ways to talk about what these landscapes are and how they've been embodied.”

She also noted that the earth is a surface on which we create roads and infrastructures. “If we think about Great Salt Lake as a canvas of all of the different lines that have been created for industry, for dykes, then these different colors in the lake lets us see things differently.”

Loe’s photographs were “discovered” on Instagram, and she was asked if she would be interested in an exhibit of her photographs at Utah State University Eastern in Price.

“There was an exhibit and that has turned into another career for me, which I am just fascinated by as it was so unexpected. I don't have a degree in photography. It's not my academic background, but there's that lake and the life in it that draws me to it.”

Loe’s photographs will be on display at Holladay City Hall throughout March as the city’s artist of the month.

While Loe now has a thriving artistic career, her academic life continues to expand. On April 18, the Utah Museum of Fine Arts will celebrate 50 years of Smithson’s “Spiral Jetty” by throwing a “birthday party.” From 3:30 to 5 p.m., Loe will moderate a panel consisting of an artist, a poet and photographer, and a printmaker who are each interested in space, phenomenology, and of course, land art.

Loe teaches art history at Westminster College, lectures frequently, and is the author of the award-winning book “The Spiral Jetty Encyclo: Exploring Robert Smithson's Earthwork Through Time and Place” (2017; the University of Utah Press and the Tanner Trust Fund, J. Willard Marriott Library).

If you would like to nominate yourself or another for Holladay Artist of the Month, please email sgillilan@cityofholladay.com.