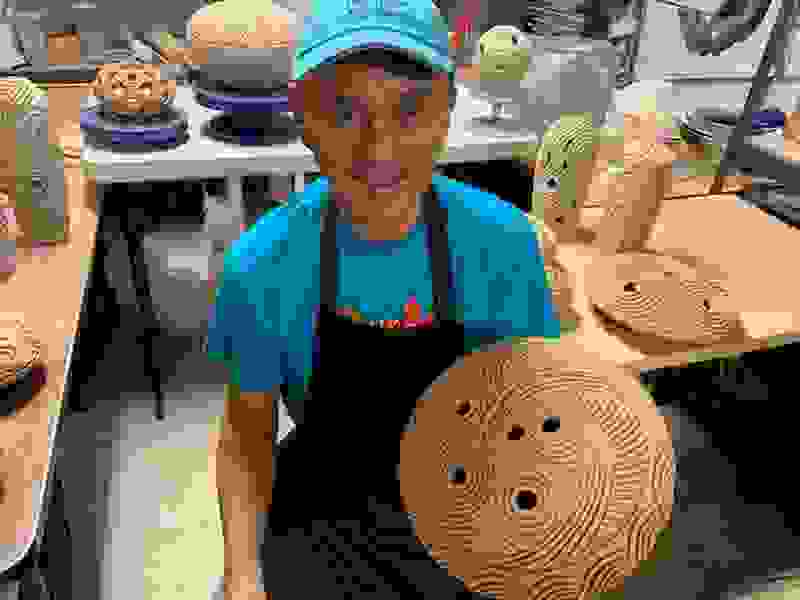 Stories Of The Earth, Oceans And Life Captured In Maori Sculptor’s Works

It would be difficult to find an artist more inwardly and outwardly focused than Eruera “Ed” Napia. New Zealand and Maori-born, Napia is not only a great sculptor but consistently gives back to the indigenous Maori, Hawaiian and North American Indian peoples.

He stated, “My brother reminded me that when you go and live on someone else’s land, which this is, Ute, Shoshone, and Goshute land…your first priority should be to contribute to the welfare of the indigenous people.” This Napia does as a program director at the Urban Indian Center of Salt Lake.

Amiable and talkative, he enthusiastically discusses both his sculptures and his “adopted” Ute brother, Radford Vernon Cuch, a former Holladay Artist of the Month with whom he shares a home. It is as if the two subjects are equally intertwined.

Referring to his early artistic career, Napia said, “I began to incorporate the designs I grew up with as a child in my artwork, and it was very strict, and you can see from some of my earlier pieces that the designs were strictly Maori, but then I started to feel a bit more comfortable, and you know you might call it poetic license, but I adjusted some of the designs so that they really reflected what I was feeling as I was doing the pot, and the story I was trying to capture….”

Napia’s sculptures are full of life, often with curvy lines, which he says appear symmetrical, but actually are not due to clever techniques used in hand-built sculpture (sculptures not made with a potter’s wheel, but by hand). The ocean breathes in these sculptures and seems to mimic the waves forming and falling on New Zealand shores. Examples of this include his pieces, “Hine-Ahu-One” (Maiden Formed from Earth), and “Papatuanuku E Huri” (Rotating Mother Earth).

“I have at least three groups of artwork, and the first group, as I alluded to, is the artwork that helps me to keep alive and tell the stories I grew up with as a child, and then there’s the stories of my life in Hawaii, still very symmetrical and certainly still very Pacific Islander,” Napia said. The sculpture, “Pikopiko” (Fern Fronds), is a collaboration between Napia and Cuch. The beadwork that decorates this piece is Cuch’s.

His first memory of sculpting was with a clay-like substance called plasticine. When he was a boy, his family was poor and could not afford to buy him many toys. He fashioned toy cars out of plasticine and used brass-looking thumbtacks for the wheels.

He has come a long way since sculpting toy cars. His sculptures appeared at an art show in Santa Monica. Last year, he won the Mayor’s Award, and he has won both first and second prize in sculpture at the St. George Arts Festival. He was also an Invited Artist for the Utah Arts Festival, no easy feat. Despite all he has accomplished, success is not how he defines himself.

“I am Eruera ‘Ed’ Napia. I am from the Te Whiu, Te Honihoni, and Te Popoto Hapu (sub-tribes) of the Ngapuhi Iwi (Tribe) from the Tai Tokerau District of Aotearoa-New Zealand where I was born. It can be said that my art is my autobiography being that I have art that represents stories that I learned growing up in Aotearoa-New Zealand, my late teen years spent in Hawaii, and my life in Utah,” he declared.

Artist of the Month

If you would like to nominate yourself or another for Holladay Artist of the Month, please email sgillilan@cityofholladay.com. or follow link below to suggest and artist.