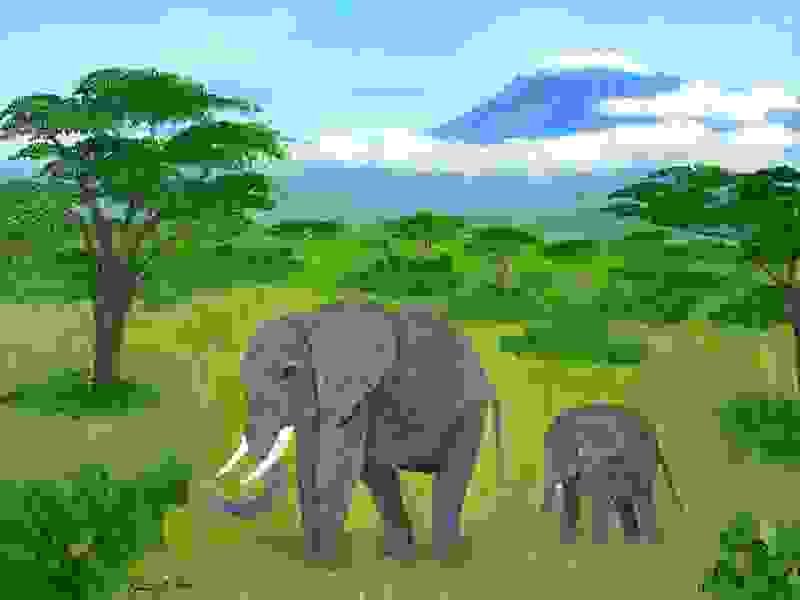 February Artist of the Month blends idealism and realism

Lyman Losee is not your typical artist. When interviewing an Artist of the Month, one does not expect to hear, “I was concerned about the safety of old Russian rockets stored in Ukraine being affected by the recent Russian invasion. I'm quite familiar with the propellant and risks involved.”

In his autobiography, he refers to his “work with rockets, explosives, and other nasty things.” Nasty as it may be, it has allowed him adventure and travel around the world.

Though involved in a technical and sometimes deadly field, Losee has a sense of whimsy. “When I was really young, I thought it would be really neat to be a cartoonist.” This desire comes out in his paintings today.

There can at times be a Grandma Moses feel to his work. A folksy animation effect pervades his animal figures and some of his landscapes.

There is also both an approach and distance from his subjects. It’s as if he is attempting to enter an idealized world seen through the cool observance of a scientist.

Perhaps this dichotomy has to do in part with Losee’s profession.

In his autobiography, he states, “Much of my . . .  work in hazards analysis was to assess handling and manufacturing operations and make recommendations to ensure that accidents did not occur. Therefore, my work and the work of my colleagues have been of a life-saving nature and therefore I feel that it was of great importance in the scheme of things.”

“On the other hand,” he further wrote, “much of my work was also involved in the development and manufacture of ammunition, rockets, explosives, and other materials used for the taking of lives during times of war and in other military operations.”

In addition to his approach/retreat style in his art, there is also a stretch toward idealism — a wish that the scene he paints or the world is better than it actually is. For instance, in “Bird of Paradise,” paradise appears to surround the flower itself. Additionally, in a savannah scene, he inserted all into one place various animals he has seen on his many trips.

His favorite medium is now acrylics, though his first medium was oil. He is also an ardent and interested photographer.

“My whole life I've had to have something to do. I cannot sit around and do nothing,” Losee said. “I have to be doing something that's worth doing.” Perhaps this was in part what drove Losee to paint.

Utah has influenced him greatly. “We're nearby the mountains and I'm a mountain-type person.” A lot of his paintings are of Utah mountains.

“I've never had any formal training at all,” he said.

Losee holds a BS degree in chemistry and an associate’s degree in electronics. He has worked at Hercules, the Radford Army Ammunition Plant, and many other places.

Longtime residents of Holladay (since 1971), Losee and his wife Carolyn have five children.

Losee’s paintings will show in February at City Hall.

If you would like to nominate yourself or someone else for Holladay Artist of the Month, please email sgillilan@cityofholladay.com.